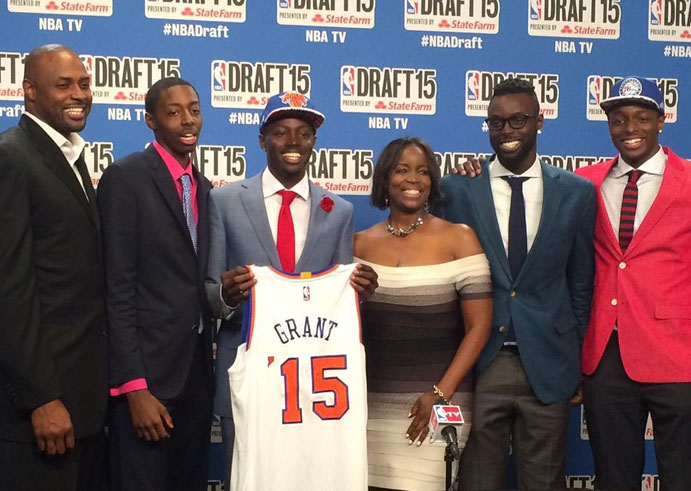 Watching my nephew Jerian get drafted to the Knicks this Thursday had me thinking a lot about how well our family has done in the NBA over the last three decades. My brother Harvey and I started it off when we were in high school and got drafted by Clemson University, where I started playing right away, but Harvey transferred to Oklahoma after one season. We both played through our whole four years of eligibility before we got drafted into the NBA.

If one thing’s for sure, we Grants are keeping basketball all in the family- it’s in the DNA.

I joined the league during the 1987 Draft as tenth pick to the Chicago Bulls, and Harvey got drafted the next year as twelfth pick to the Washington Bullets. Man, our parents were proud. Two twins in the NBA, and between us we have 28 seasons total. But after our careers ended, we moved separate places and started our own families. Now I have four rings, but Harvey has four kids who are all making a name for themselves in the basketball world.

All four of my nephews went to DeMatha High School in Maryland, and were part of a very successful basketball program. My brother’s oldest son, Jerai, made his Uncle Horace even more proud by playing four years for my alma mater, Clemson University in South Carolina. Jerai killed it with the Tigers, and made the All-ACC Defensive team his senior year. After college he left America to play for teams all over the world- in Australia, Italy, Israel and now Latvia. I’m doing my fair share of traveling too, and I definitely plan on making it out there to see one of my boys play overseas. (Oh and can you say hi to your brother’s new teammate Kristaps before he moves to NY?)

Onto my nephew Jerian. Jerian had a hell of a career at Notre Dame for four seasons, and earned ACC Tournament MVP, All ACC MVP, and first team All American in 2015 during his senior year. With a 32-6 record Jerian really turned heads during the NCAA Championships. The Irish lost by just two points to undefeated Kentucky State during the Elite Eight. After four great years, Jerian entered the 2015 draft ready to make us proud. He ended up getting picked up by the New York Knicks after a three way trade with the Atlanta Hawks and Washington Wizards.

Phil even claimed there were DNA considerations when drafting Jerian- and I can’t argue with that.

I would have been proud of Jerian no matter what team he ended up on, but there is something really special about him joining the Knicks. My old coach of nearly ten years, Phil Jackson, is now the President of the Knicks, meaning Jerian will be running the infamous Triangle offense. I can’t wait to see how Jerian mixes it up with Carmelo Anthony and fellow draftee Kristaps Porzingis running Triangle. NY fans are going to love Jerian, and I am so glad he and his brother Jerami can play against each other just like Harvey and I did. Phil even claimed there were DNA considerations when drafting Jerian- and I can’t argue with that.

My third nephew Jerami is just one year younger than Jerian, and was the 11th ranked power forward and 37th overall player coming out of high school in 2012. He played for Syracuse for a couple years before being picked up in the draft by the Philadelphia 76ers, where his Dad played for his last season in the NBA. Jerami has lived in Philly for two years now, and I certainly plan on visiting him soon so I can see him play on the same court I did during my time. In January Jerami slammed eight blocks during just one game, the most of any Sixer in nearly ten years. Looks like Jerami takes after me a little more than I thought!

Jerami and Jerian used to come out to my home in Central California every summer for years to train with me. I would always try to remember exactly what me and Harvey needed when we were their age, which was mostly strength and speed. I’d have them spend a couple hours in the weight room and the rest of the day practicing fundamentals and running drills with me. I always thought the Central Coast was a great place to train because players can get away from all their distractions at home or in big cities, and instead can focus on their game and take breaks relaxing on the beach. The boys remind me a lot of me and my brother- very competitive, but really close friends at the same time. All I know is, whatever I was doing with them during the last few summers must be working!

My youngest nephew, Jaelin, just graduated from DeMatha hoops just like his brothers did, and will be hitting college in South Carolina to play basketball with NBA hopes.

With a house full of four boys, I know my twin brother was always kept busy at home. I am so happy I got to spend as much one-on-one time with my nephews as I did over the years, especially since they are living all over the world pursuing their own careers. I have watched them grow from young, crazy little ones to fully grown, talented adults who have been a great example to my kids while they were growing up.

And to sum up some last bits of advice for all of my nephews, just three things: sacrifice, hard work, and remember: you are not above the team. And of yeah, can you send me a check for all of the food you have eaten at my place over the years?

If one thing’s for sure, we Grants are keeping basketball all in the family- it’s in the DNA.