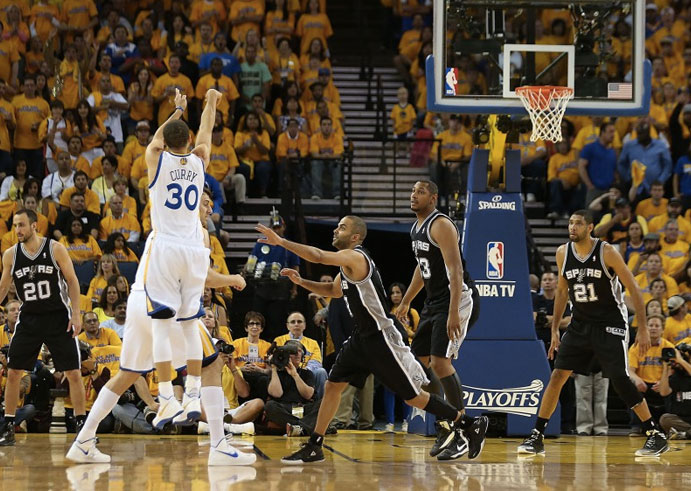 Throughout 69 seasons of the NBA, the constant evolution of players, styles, and regulations has always created a thrilling game for viewers. The game has has changed drastically since the era of the three inch inseam, creating a greatly different playing style. The implementation of the three-point shot and the elimination of hand and forearm checking were created in response to a highly physical, big man’s game, and resulted in the subsequent rise of “small ball”.

The introduction of the three-point shot began in 1979, when the NBA absorbed the failing American Basketball Association- who instituted the three-point shot in a desperate attempt to liven up the game. When the NBA and ABA combined, the three-point shot came with it. Despite the overwhelmingly positive reaction from crowds, players and coaches alike initially opposed the three-pointer. Famed coach and player Gregg Popovich claims “To me, it’s not basketball, but you got to use it. If you don’t use it, you’re in big trouble. But you sorta feel like it’s cheating… I still hate it.” Players of past eras echoed the same belief, such as twelve time NBA All-Star Larry Bird, who remembers “Back when I played, we just didn’t shoot it that much. Now, if you’re not firing up thirty 3’s, you’re just not playing basketball.”

Although NBA stars of the past may see it as an easy way out, it is impossible not to acknowledge the immense role the shot plays in the game now. Consider the 2014-15 Golden State Warriors and Cleveland Cavaliers during the playoffs: the teams took second and third place in NBA history for average 3’s taken during each game, 29.1 and 30.3 respectively, compared to the first season after its implementation (1981-82) where Pat Riley’s Lakers won the Championship while scoring just 13 total 3’s throughout the entire season. It is evident how dependent teams have grown on the shot, accurately summed up by Greg Popovich who begrudgingly concedes, “If you don’t shoot the 3, then you probably aren’t going to win.”

Another massive rule change that shook the foundation of defense was the gradual eradication of hand and forearm checking. Due to the increasingly aggressive defense among teams like the “Bad Boy” Pistons in the 1990’s, the NBA aimed to combat fighting by instituting various regulations throughout the early 2000’s. In 1999 the biggest rule aimed at creating a softer game was eliminating defensive contact with hands and forearms both in the back and front court, except with offensive players who got the ball below the free throw line. Similarly, defenders were prohibited from “re-routing” players off the ball, or impeding offensive players setting screens.

The NBA received plenty of criticism for allowing the game to become too “soft” by outlawing strong defense. The Association acknowledges the new rules were intended to liven up the slow, physical game by choosing “a special committee of basketball experts… in the early part of the decade to study the game and make recommendations as to how to make it more exciting to watch,” in attempt to encourage a more fluid, inclusive offense. By doing so, the court successfully opened up, causing a steady rise in average points scored, field goal percentage and three-point percentage.

The rise of “small ball”

By following the new rules implemented in the early 2000’s, basketball drastically changed to fit this new mold. One of the greatest changes seen over the last decade is the successful rise of “small ball,” and the deviation from big men consistently stationed under the post. Small ball is played by teams who sacrifice player size and low post emphasis to instead utilize smaller, agile outside scorers. Small ball teams build around a strong forward, such as LeBron James, Kevin Durant or Carmelo Anthony, who are then surrounded by players who can fluidly switch between positions.

“Small ball is the way everyone’s going and it’s good for us, we’re good at it.”Steve Kerr

The 2014-2015 Golden State Warriors are an incredible example of the success of small ball. Without a massive player to physically dominate under the post, the Warriors won a Championship for the first time in forty years without starting a player over 6’8’’. Implementing offensive tactics that allow all five versatile players to execute quick, effective passes before shooting was essential to their success, and is certainly due in part to the athleticism and agile size of the players. Gone are the days of coaches preaching, “you can’t teach size,” and instead cue coaches like Steve Kerr, claiming, “Small ball is the way everyone’s going and it’s good for us; we’re good at it.” As the greatest basketball team in the world right now, ‘good’ is a crude understatement.

With a drastically more spread-out court and lack of big men posting up under the basket, players are also encouraged to increase outside shooting, once again leading to the mounting rise in three-point shots. League MVP Steph Curry, standing at just 6’3’’, is an embodiment of how greatly a team can benefit from having an excellent outside shooter, and is often regarded by many as possibly the greatest shooter of all time. Curry broke Reggie Miller’s record by hitting 59 three-pointers throughout thirteen games during postseason, while it took Miller 22 to complete 58 3’s. He also broke his own 2013 record by making 286 during regular season. Curry’s outside shooting is undeniably an essential factor to the Warrior’s postseason success.

Another factor contributing to the evolution of the NBA is the presence of international players in the league. International players are molded throughout their early careers with a greater emphasis on team fundamentals, rather than individual success. Because U.S. players grow up playing on numerous AAU basketball teams throughout their youth, they are taught more to focus on their individual development rather than that of the group. AAU can be damaging to young players who compete in upwards of 100 games throughout the year by participating in leagues during the offseason. Players are coached to be able to perform at their greatest caliber year-round.

In contrast, European players spend this time practicing the basics and essentials of basketball while working as a team during offseason. Upon recognizing the benefit of this style of play, international players have become increasingly present in recent years throughout the NBA – with nearly a quarter of players representing 37 nations and territories during the 2014-15 season.

One team that has adequately embraced the European-style of play is the San Antonio Spurs. When San Antonio’s coach, Greg Popovich was a young player, he had a shocking revelation after being badly beaten by a Lithuanian team. He remembers, “We didn’t get beat, we got shown up. We didn’t just lose the game, we got a reminder about passing, moving the ball, sharing responsibility and playing the right way. Personally, I had my eyes open to the fact that there were great basketball players all over the world, even if nobody back home knew it.”

“He decided there wasn’t a place in the world, a street we wouldn’t walk down, a rock we wouldn’t turn to find a player.”R.C. Buford

After acknowledging the massive talent that lay overseas, Popovich incorporated his beliefs into coaching and began building his rosters with international players – including nine in 2014 when they won a Championship. With this strategy Popovich became a three-time NBA Coach of the Year and earned five Championship rings. Spurs general manager R.C. Buford claims “This is all Pop’s vision. He decided there wasn’t a place in the world, a street we wouldn’t walk down, a rock we wouldn’t turn to find a player.”

Spurs star Manu Ginobili from Argentina claims, “Of course, in general, we’re not gonna run as fast or jump as high. That’s the Americans doing what they have. So with the tools you’ve been given, you’ve got to find a way. Here, we just play the way Pop wants, the way we like, the way that gets to most out of us.” Popovich knows how to tailor his game to international players, and the effects of European-style play have been nothing short of successful.

Overall, basketball has seen a drastic revolution since the ages of Kareem Abdul Jabbar, Larry Bird, Wilt Chamberlain and even Michael Jordan. With the addition of the three-point shot and the removal of hand and forearm checking, basketball as a whole has become a more spaced out game that emphasizes outside shooting, teamwork and speed. Coupled with the introduction of more international players than ever before, fans can expect an increasingly quick, smart game that develops in the NBA over the next several decades.