Although it was a difficult decision, Horace left the Bulls in 1994 to join young players Shaquille O’Neal and Penny Hardaway on the Orlando Magic. In his first season in Florida the Magic made their first ever Finals appearance against the Houston Rockets, but fell short of a Championship in 1995. Horace remained an instrumental part of the team throughout a changing roster, but ultimately decided to leave after five seasons in Orlando. 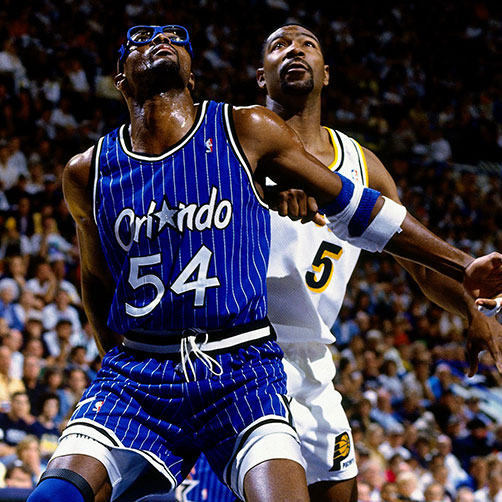 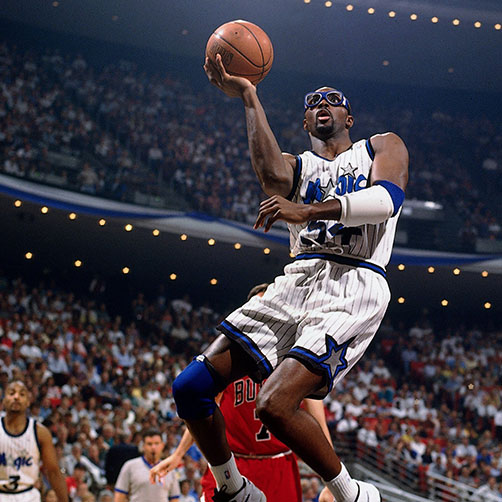 After an incredible seven seasons with Chicago, Horace resigned as a free agent before joining the Orlando Magic. Beginning in the 1994-95 season, Grant joined Shaquille O’Neal in his third year and Anfernee “Penny” Hardaway in his second year in the NBA. The Magic organization itself was just six years old, and with the acquisition of Horace, Orlando found themselves as a highly competitive team for the first time in franchise history. Although quite different from the team he was accustomed to, Horace was excited to experience a change of pace and test himself, because “Orlando wasn’t a team I was used to. I loved the Bulls and I still love Chicago, and I got comfortable there. But switching it up and heading to Florida was something I had to do.” 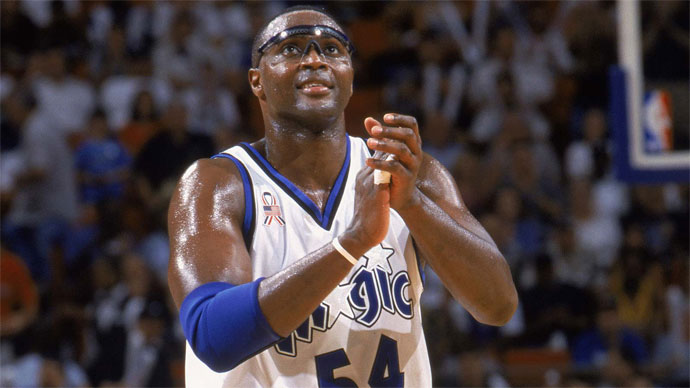 Welcome to OrlandoIn 1994 Horace began his five year career in Orlando, where he is often regarded as one of the greatest players to play for the Magic.

Grant’s contribution allowed the team to boast one of the most dominant starting lineups in the NBA, with Shaq averaging nearly 30 points per game and Hardaway’s exceptional talent (and height!) as a point guard. With a 57-25 record during regulation season, the Magic easily took the Atlantic Division while also tying for the second best home record (39-2) in NBA history. 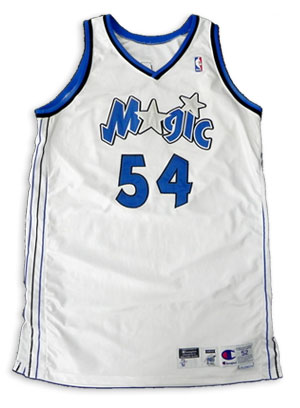 Black and BlueIn addition to a acclimating to life in Florida, Horace had to adjust to wearing white and blue instead of black and red.

“Orlando wasn’t a team I was used to. I loved the Bulls and I still love Chicago, and I got comfortable there. But switching it up and heading to Florida was something I had to do.”

Orlando went into the playoffs confident in their ability, but young in experience. In the first round of Eastern Conference Finals, the Magic destroyed the Boston Celtics 124-77 in Game 1. Orlando proceeded to eliminate the Celtics from the playoffs in four games, two of which were the last games to be played in Boston Garden. On May 5th, 1995 at the very end of Game 4, Horace made history by scoring the final basket to ever be made at the venue, and affirming their series ending victory. 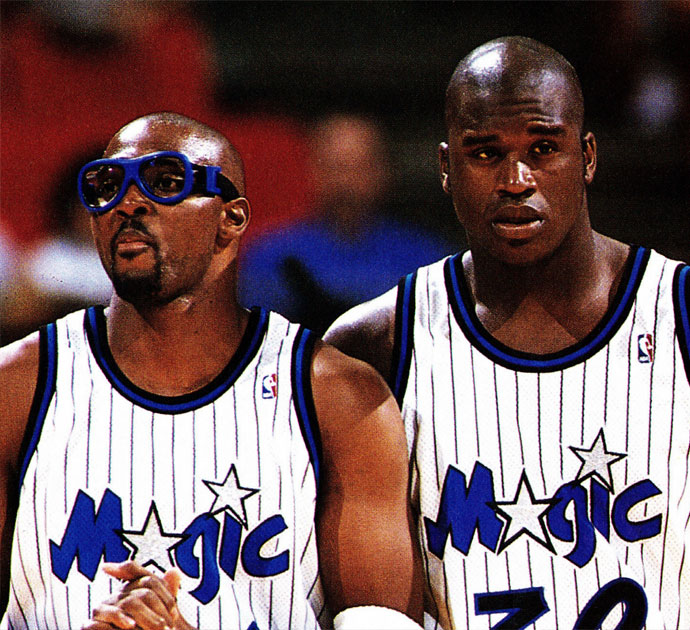 A New Cast of CharactersUpon joining the Magic franchise as they entered their fifth season, Horace found a new All-Star cast amongst teammates Shaquille O’Neal, Penny Hardaway and Dennis Scott. 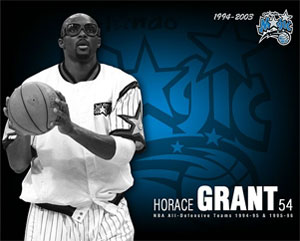 Making New FriendsHorace became a fan favorite in Orlando, where they recently honored him at Legends Night in 2014.

In the second round of the ‘95 Playoffs Horace took on his past teammates, the Chicago Bulls. With Jordan back on the team after a short stint in Minor League Baseball, emotions and expectations ran rampant on both teams. The Magic struck first by winning Game 1 by five points, with a final score of 94-91. Magic player Nick Anderson made the following games more interesting by challenging Jordan, who was now sporting the number 45, by claiming “Number 23, he could just blow right by you! Number 45, he revs up, but doesn’t really take off.” Coming back with something to prove, Jordan chose to return to his original number and came back with an increased thirst for victory. Sharing back and forth wins for the first four games of the series, the Magic pulled it together during Games 5 and 6 to clinch the series and advance to conference Finals over the Bulls.

Horace and the Magic took on the Indiana Pacers as their last hurdle before their first ever Finals appearance. The Pacers pushed Orlando to seven games before succumbing to the skill of their starting five, sealing a Game 7 win by 24 points. In an unusual turn of events, the home team won every game of the series.

In Orlando’s first NBA Finals in 1995, the Magic faced the Houston Rockets, reigning NBA Champions. The Magic were unfortunately unable to recover after a close loss in Game 1, where Nick Anderson missed four consecutive free throws before Kenny Smith sent the game into overtime with a record seven three pointers in the Finals. The Rockets then swept Horace and the Magic in four games to win back to back titles. Horace recalls the series “was a tough one. We had all the right material, did all the right things, but had a lot to learn about playing with each other as a team. We could have done it, but we just weren’t quite there yet.” That year the Rockets became the first team to ever win the championship as a sixth seed. 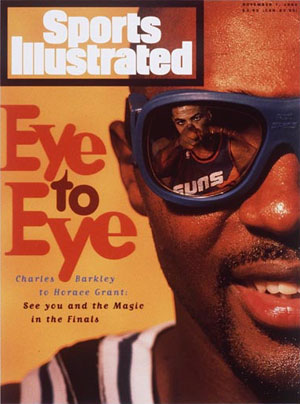 Approaching the 1995 FinalsHorace, graced the cover of Sports Illustrated in November of the 1994-95 season, with the fierce reflection of Charles Barkley seen directly challenging him in the lens of his goggles.

The 1995-96 season brought its own challenges and rewards, beginning with a season record of 60-22, the best in franchise history to this day. Shaquille O’Neal was out for the first 22 games of the season due to a thumb injury, meaning the pressure was on for returning starters Horace Grant, Dennis Scott and Penny Hardaway. Scott made a single season record of 267 three pointers, and Hardaway made the all-NBA first team. Pitted against each other once again, the Bulls beat out the Magic for Eastern Conference first seed with a record of 72-10.

The 1995-96 season brought its own challenges and rewards, beginning with a season record of 60-22, the best in Magic franchise history to this day.

In the first round of the playoffs the Magic swept the Detroit Pistons in just three games before taking the Atlanta Hawks in five games. In the Eastern Conference Finals Horace met his past teammates, the Chicago Bulls. Despite eliminating the Bull’s in the playoffs the year prior, Chicago was back with a vengeance, and swept the Magic 4-0. Chicago began their second reign of greatness with the first championship win after a two year hiatus. The second three-peat of the “Jordan era” would follow for the next two years.

During the following season, 1996-97, Horace remained on the Orlando Magic while changes in his team’s roster greatly affected the course of the next year. Shaquille O’Neal left the Magic to join the Lakers, a decision he would later regret, claiming: “knowing what I know now, I would’ve stayed. I would’ve stayed and fulfilled my seven years.”

Despite losing their head coach midway through the season and holding a slipping regulation season record of 45-37, Grant still saw his tenth round of playoffs. For the first time in history two Florida teams faced each other in East First Round Playoffs when Orlando took the Miami Heat, ultimately losing in five games. The Bulls won the second Championship of their second three-peat. 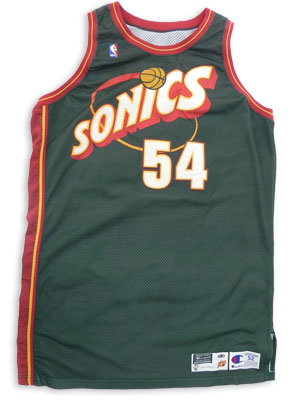 A Year in the NorthwestAfter a thrilling career in Florida, Horace joined his third NBA team as he entered the 1999-2000 season with Seattle.

The 1997-98 season proved to be a trying time for Horace and the Magic. Penny Hardaway only played 19 games due to various injuries, and with Shaq gone, Horace became the starting Center for Orlando. Finishing tenth in the Eastern Conference with a record of 41-41, for the first time in his career Horace did not make it to the playoffs.

The following 1998-99 season improved slightly for Orlando, finishing regulation with a 33-17 record, placing them second in the Atlantic Division and third in the Eastern Conference. Horace and the Magic were back in the playoffs after their brief hiatus, but their run was cut short by a first round elimination to the Philadelphia 76ers in four games.

Welcome to SeattleSwitching coasts, Horace was traded by the Magic to the Pacific Northwest team to join Gary Payton and the Sonics.

After five years with the Orlando Magic, Horace was traded to the Seattle SuperSonics, an established program of 33 years. In a post Coach George Karl-era, Horace joined nine year veteran point guard Gary Payton in the Pacific Northwest. Through a jarring year of lengthy winning and losing streaks, the Sonics ended the season with a 45-37 record, and made their way into the playoffs. The seventh seed Sonics took on the second seed Utah Jazz in the first round Western Playoffs, where veteran Jazz player Karl Malone scored a career-high 50 points that assured a loss for the Sonics. After losing game two to weak scoring power, the Sonics prevented a sweep by winning game 3 at home in the Key Arena. Although Gary Payton would earn his first playoff triple double, game four would fall to the Jazz as well. Game 5 would prove to be the smallest margin won yet, the only game lost by single digits, but the Sonics were out nonetheless. Horace’s eleventh round in the Playoffs was cut short.

Horace changed the color and style of his goggles with every team he played on.