Since retiring in 2004, after 17 seasons in the NBA, Horace has traveled the world promoting the game of basketball, coaching aspiring athletes and inspiring fans. If you are interested in having Horace at your event, please contact his team. 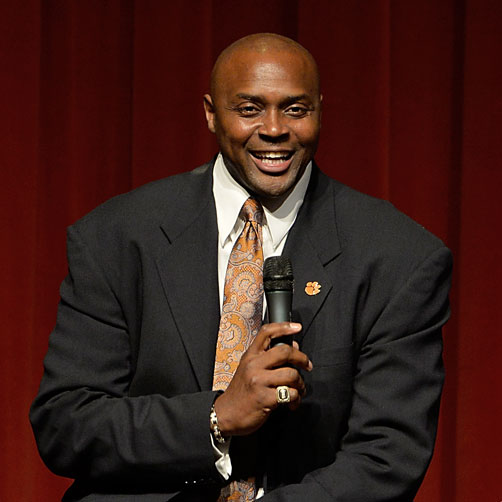 Horace is available for speaking engagements in a variety of settings, including academic and corporate. He is a highly skilled and experienced public speaker who can engage a multitude of topics geared towards the occasion at which he is presenting.

If you’re interested in booking Horace Grant for an upcoming event, send an email to team@horacegrant.com or by clicking on the button below.

Speaking topics include but are not limited to:

“Horace was our legend at the 2015 ACC Tournament and it was a memorable weekend for Clemson basketball. He represented our university and basketball program in a first class manner and it was terrific for all the Clemson fans in attendance to relive those days when he was our only ACC Player of the Year. He did everything we asked including engage with our fans, many of whom were in the stands at Littlejohn Coliseum rooting him on to an All-American career. It was a great experience.”Tim Bourret, Clemson University

Horace is available for personal appearances and meet and greets for NBA followers and organizations alike. Throughout 17 years in the NBA, Horace has garnered a wealth of knowledge about the league and all of its past and present players, and loves to share this information while engaging in conversation with fans.

Horace loves to engage fans and supporters, and is available for autograph and memorabilia signing as well as photographs with fans during events. Horace is willing to sign autographs at other events he attends as well.

“It was such a pleasure having Horace at our fundraiser. His presence truly inspired our guests. It’s an experience we will never forget.”Bridget Ready, Jack’s Helping Hand

Horace is an active philanthropist and firm believer in the power of giving. He frequently visits and donates to local and national fundraising events, and would love to expand the events he attends. He often auctions off apparel and signed items in addition to attending and speaking.