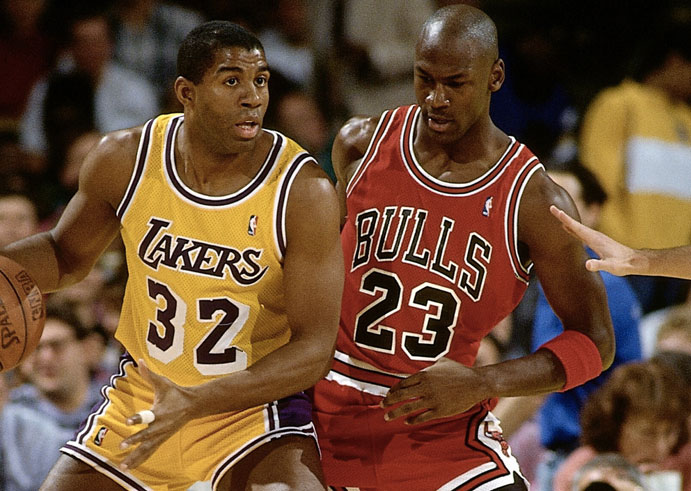 “I don’t get caught up in hypotheticals,” but…

Basketball players’ use of social media has recently been making waves in the NBA, with incidents such as the Twitter emoji war over the signing of DeAndre Jordan, the time Larry Nance Jr. didn’t know he was referencing his future teammate with his candid tweet, or when Dwight Howard was incriminated by pictures a 16 year old girl posted dominating the news. The most recent controversy spurred over a social media post included two of the NBA’s greatest veterans, Shaquille O’Neal and Scottie Pippen.

When Shaq first Instagrammed a picture of the Los Angeles Lakers’ five best all time players (Magic Johnson, Kobe Bryant, Elgin Baylor, Shaq and Kareem Abdul Jabbar), matched with the greatest of the Chicago Bulls (Derrick Rose, Michael Jordan, Scottie Pippen, Dennis Rodman and Horace Grant) he initially boasted, “we would beat ’em by fifty”. While a tsunami of thousands of highly opinionated comments flooded the post, Scottie Pippen fired back at Shaq’s claim by posting a photo of he and Michael Jordan, retorting, “All I know is we won 6 titles, twice the amount you claimed while in LA.” A slew of back and forth Photoshopped posts and insults followed, jabbing each other’s career and teammates, but mostly bruising their egos, although it was most surely in good fun.

Countless analysts and sports blogs have adopted the question, creating NBA2K scenarios from the given teams, and analyzing pros and cons of the players. Tens of thousands of basketball fans have taken to the internet themselves to present their polarized opinions on the matter – but a verdict has yet to be reached, and the question still remains: would all time Bulls or all time Lakers earn bragging rights in this hypothetical, generation-spanning All-Star game?

“The Bulls would have killed them!” read Horace Grant’s Instagram caption on a re-posted photo of the image Shaq initially shared. Grant continues, “Man I loved both teams. I won championships with both teams. The Lakers have it deep, you know the greatest over eras, but I know me, Michael and Scottie. And Rose and Dennis? We don’t lose much.” Horace may be right for two main reasons – small ball and team ball.

The first advantage the Bulls have over the Lakers is their size. While Los Angeles has two big men over seven feet tall, Grant is the tallest of the Bulls team members at 6’10’’. The rise of ‘small ball’ in the league can be attributed to the immense success of teams like the Bulls, where most players fall in the mid six foot range. Many teams have succeeded with the big-man-under-the-post style of play, but the Bulls, and most recently the Golden State Warriors, have proved it is possible to be Champions without it.

Putting smaller, more agile players Grant and Rodman under the post against massive forces Shaq and Kareem Abdul Jabbar, who have a combined 10 inches and 126 pounds on the former pair, would create a surprisingly equal post game. Combining the average rebounds per game of Rodman and Grant throughout their career gives the Bulls 21.2, while Shaq and Kareem’s combined score is just 22.1. With less than one rebound per game constituting the different between two pairs of players ten inches separated in size, the Bulls prove that big men aren’t absolutely necessary to physically dominate under the post.

While the Lakers are undoubtedly built from immensely talented and capable athletes – pitting five quick, agile, physically dominating players against a team where half of the guys can’t get down the court to compete is no contest.

In addition to being equally skilled on defense as their larger opponents, the ideal size of Bulls players allows for their incredible speed and rapid turnover rates on both sides of the court. The awe-inspiring defense of the Lakers is of no use if they can’t keep up with Chicago down the court on a fast break, diminishing the benefits and effectiveness of their blocking and rebounding ability. If all of the benefit of talented big men is lost to the skill of smaller, faster men, the Lakers would not even get a full chance to utilize their seven foot tall players, sacrificing speed for skills that would never reach fruition.

While the Lakers are undoubtedly built from immensely talented and capable athletes; pitting five quick, agile, physically dominating players against a team where half of the guys can’t get down the court to compete is no contest. Look at the 2015 NBA Finals for affirmation that teams like the Warriors end up on top versus teams like LeBron’s Cavaliers.

All-Stars who don’t play well with others

On paper, a team consisting of Shaq, Kareem Abdul-Jabbar, Elgin Baylor, Magic Johnson and Kobe should not be able to lose. Three are Naismith Hall of Famers and four are members of the 50 Greatest Players of All Time (Kobe is expected to become a part of both), so what could possibly go wrong?

The very nature of all five players’ roles on their individual teams presents an issue many may consider a positive attribute: they are all first options.

The very nature of all five players’ roles on their individual teams presents an issue many may consider a positive attribute: they are all first options. All of the players are leaders on the scoreboard, ending their games being carried out of the backs of their disciples in the wake of victory. It was everybody else on the team’s job to get this player the ball, to set this player up for any and every shot they possibly can, and to protect this player at all costs, because there would be no team without them.

So on a team consisting entirely of these players… Who does the set up? Who sets the picks? Who makes the pass to the All-Star when they could have taken a shot themselves? Who is assisting who? Who is sacrificing their ego for the betterment of their team? Who allows their sole priority to become another player’s success?

Asking any of the player on the Lakers mock-roster to dramatically shift their mentality from being the sole first offensive option to becoming the third, fourth or fifth is a tall order for any of the individuals.

For example, during the many years that Shaq and Kobe shared on the Lakers, their clashing personalities drove a wedge between the players that greatly affected the team. Coming to the Lakers in the same year, Kobe straight from high school and Shaq by trade, their feud become a prominent fixture in the NBA and served as an elephant in the room for every practice and game. Shaq made this initial opinion about Kobe glaringly apparent from the start, confidently claiming: “I’m not going to be babysitting.”

After three years of unsuccessful playoff rounds, the unbelievably talented duo earned their own three peat from 2000-2002, but continually struggled to keep it together as a team. Between salary disputes, injuries, but mostly a lethal mix of egos, the 2003-04 Lakers fell flat due to conflict. A team where Karl Malone, Gary Payton and Horace joined Kobe and Shaq did not play to their full capacity during crunch time when they should have easily flourished. Magnify the destruction Shaq and Kobe’s struggle to split their offense in two by adding three players – and watch disaster unfold. All five Lakers have a Michael Jordan-sized ego, without a Horace Grant or Scottie Pippen sized supporting cast to play under it without challenging the player.

The Bulls’ team-first mentality has been flawlessly melded with their playing style, having already battled through the who’s-on-top years and emerged balanced.

The Bulls on the other hand have already worked it out. Their team-first mentality has been flawlessly melded with their playing style, having already battled through the who’s-on-top years and emerged balanced. Phil Jackson’s Triangle offense stressed sharing ball handling, shooting and defensive responsibility, emerging as highly successful throughout the 1990’s. The Jordan / Pippen / Grant and Jordan / Pippen /Rodman combinations have both resulted in NBA Championship three-peats, and reside in league history as arguably two of the most famed trios of all time. The presence of first options as wells as incredibly skilled role players built with a mentality geared toward mutual success forged a solidified place in history for the Bulls, something the combined talents of the Lakers simply could not complete under the same conditions.

Bottom line – It would be harder for five first option players to realign themselves as options two through five than it would be for the Bulls, slightly smaller in stature, to successfully defend their larger, equally talented counterparts. Four of the five Bulls have proved without a shadow of a doubt that their playing styles and personalities are highly successful in conjunction. Possessing Michael Jordan, the greatest player of all time, Derrick Rose, a point guard talented enough to earn comparisons to MJ, and Grant, Rodman and Pippen who all know how to capitalize on these players’ greatness is unfathomable, and could more than likely beat a Lakers team comprised solely of All-Stars.