After being recruited by Clemson University coach Bill Foster, Horace and his twin brother Harvey began at the South Carolina college in 1983. Horace stood at 6’10 and just 200 lbs before bulking up to fill his role as power forward, and four years later left the team 20 lbs of muscle heavier. The most notable season of Clemson basketball history came Horace’s senior year, when he lead the ACC in points (21 ppg), rebounds (9.6 rpg), and shooting percentage (.656). Horace is the only Clemson player to ever be crowned ACC Player of the Year, was named to the First-team All-ACC, and was a consensus Second-team All-American. Because of his fierce leadership and incredibly advanced playing style, Horace was declared the Greatest Clemson Basketball Player of all time in 2012, and an ACC Legend in 2015. 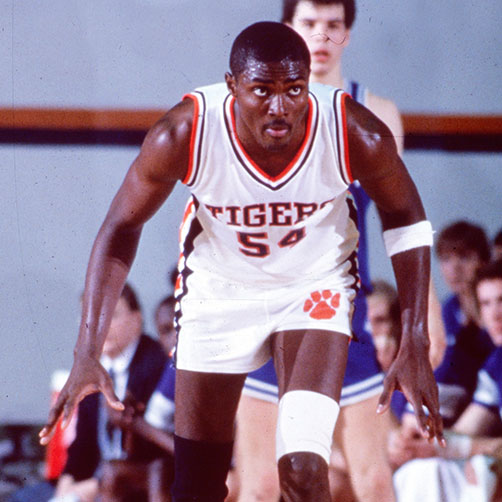 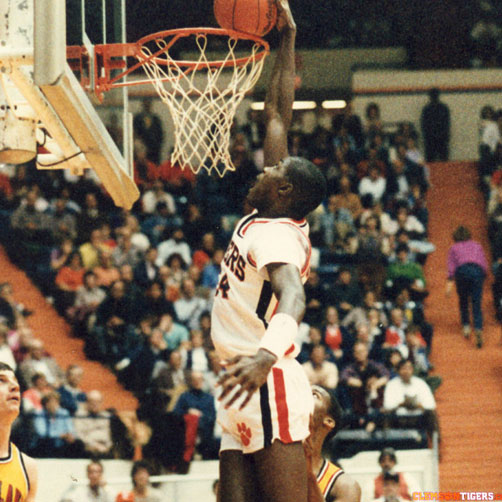 Originally spotted by Bill Foster at a Hancock Central High School game in Sparta, Georgia, Horace and his twin brother Harvey were not originally in the spotlight for college recruiters. According to Horace, “No one really looked at us until the end of the season when Harvey and I both did really well in a postseason game. Some college scouts had come to see players on the other team, but we did really well.” Initially between Georgia Southern University, which wanted the twins to go to prep school for a year, Southern University, and Anderson Junior College, newfound attention from Clemson University was a very attractive option. The twins committed to Clemson, prompting Foster to curtail the release of their signing to the media to prevent other programs from finding out about the talented brothers he discovered.

“We were a hard team to stop.” 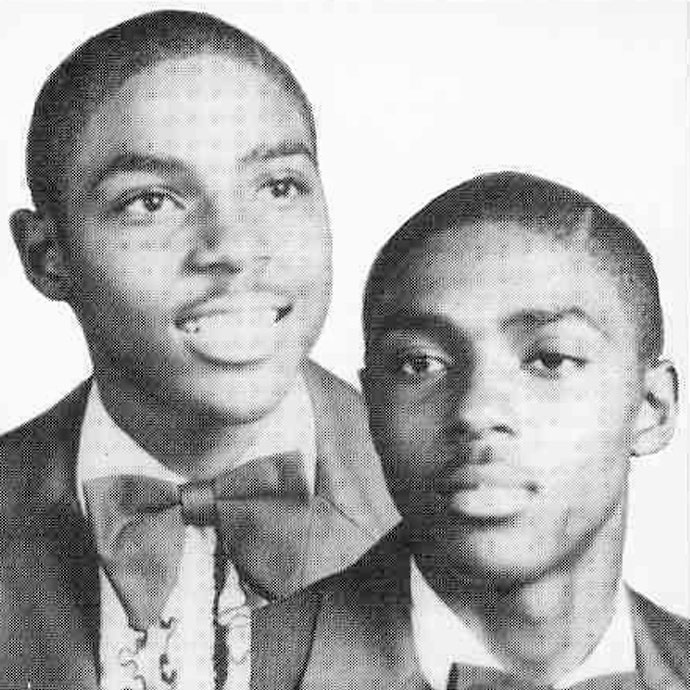 Who’s Who?Before identical twins Horace and Harvey Grant were NBA Stars, they were just brothers from a small town playing hoops on a makeshift court to pass the time.

Upon beginning his college career in South Carolina at 6’10’’ and just 200 lbs, Horace was a skinny young player with raw talent and an incredible work ethic. Harvey redshirted before eventually transferring to Oklahoma, but Horace began playing for Clemson right away as a freshman in the 1983-84 season. One of the many notable games during Horace’s first year was against Duke, college basketball powerhouse, in which Horace stepped in for existing power forward Murray Jarman and put up 16 points, shooting 6-6 from the field and 4-4 for free throws. The game was one of two Clemson wins over the Blue Devils since Mike Kryzewski began his dynasty as head coach of Duke three seasons prior.

Coach Foster only had the opportunity to work with Horace during his first season before ending a nine year career with Clemson. Foster is still an esteemed role model for Grant, who claimed he “was like a father figure for me when I came to Clemson. He really cared about us as people, not just basketball players. We had a lot of sessions with people about manners, and balancing a checkbook, job interview skills, and other things that helped you with daily life. When we took road trips, we took tours of historical places in the area.” With big shoes to fill, Clemson hired Cliff Ellis as head coach. 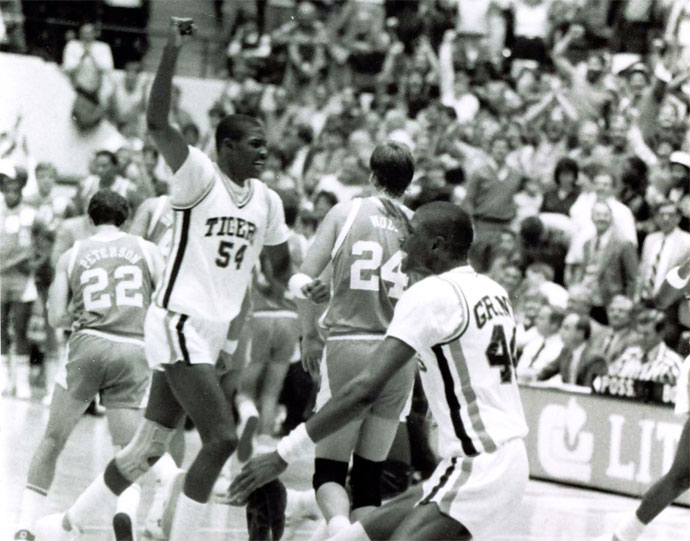 Tigers Add Two Grants to the RosterHorace and Harvey celebrating a win during their brief time playing together at Clemson University. Horace went on to become a legend at Clemson, in South Carolina and in the ACC.

Starting as power forward in his sophomore year, Grant gained more visibility in the league and began to brush shoulders with opposing players of a higher caliber. Putting his hard work into action, Horace averaged a double-double as a junior. His greatness in his third season was just a preview to the immense success of his senior year. 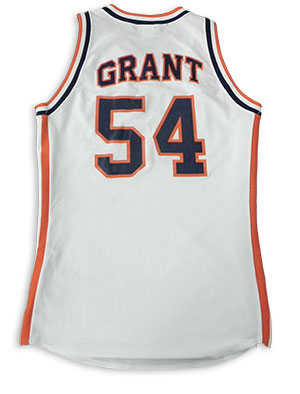 Purple and OrangeHorace remembers choosing the number 54 when he began playing in middle school because it was one of the last numbers that remained unclaimed.

As a senior, Horace spearheaded a season that is still inarguably declared the greatest season of Clemson Basketball history. During the 1986-87 season he averaged 21 points, 9.6 rebounds, and shot .656 from the field, leading the Atlantic Coast Conference in all three categories. Grant was the first in league history to do so, and one of just two to win the triple crown in 62 years, joined only by Tim Duncan. He ranked third in the nation overall in field goal percentage, and is still the only ACC player to ever shoot at least 65 percent from the field while also averaging over 20 points per game. Grant is the only Tiger to ever receive Most Valuable Player for all of the ACC, and even earned a spot as second team All-American.

Grant lead the league in points, rebounds, and field goal percentage, and was the only Clemson Tiger to ever receive ACC Player of the Year.

Grant’s powerful presence on the court often prompted opposing teams to double team him. With the introduction of the three point shot to the NCAA in 1986, Clemson adapted quickly thanks to Coach Ellis, who “…wasn’t afraid to use it. A lot of coaches were. Those guys opened things up for me on the inside. When I had a big game, I opened things up for them on the outside.” With the perfect storm, “We were a hard team to stop.” Clemson went on to average .448 in three point attempts, which is still the best record in ACC history. Horace credits this incredible record to his teammates, remembering “Michael Tait, Michael Brown, Larry Middleton, Grayson Marshall, Anthony Jenkins all hitting a lot of three point shots.” Clemson went 25-6 in Horace’s final season, was the last team in the nation to lose on the road in 1986-87, and earned a spot as 10th in the nation. They averaged 86 points per game, and outscored opposing teams by an average of 15 points per game. 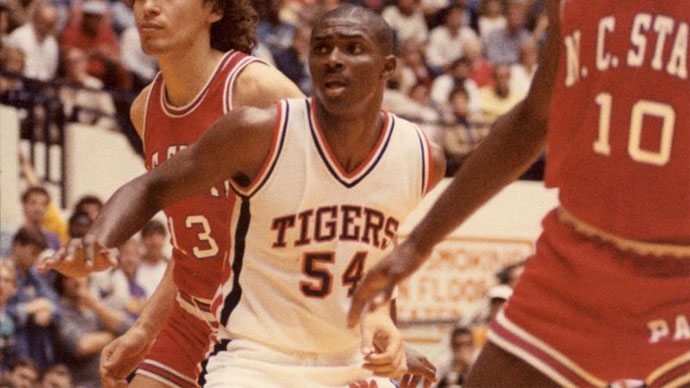 Building Strength and StaminaHorace added 20 pounds of muscle to his 6’10’’, 187 lb frame during his time at Clemson. He’d continue to use his size to his advantage during his 17 years in the NBA.

Horace remembers his teammates as the most important key to Clemson’s success that season, claiming “We really had a talented team. Just think, Elden Campbell, Clemson’s all-time leading scorer was my backup! Jerry Pryor was a very strong player inside as well.” With all the right pieces to the puzzle, “Coach Ellis did a great job of putting us in a position to win.”

The Greatest Player to Wear Orange and Black

Upon celebrating their basketball program’s 100th year in 2012, Clemson officials drafted a list of the best 25 players their program had ever seen. Among the list were seven first-round draft choices and seven players with at least 10 years in the NBA, including Horace. 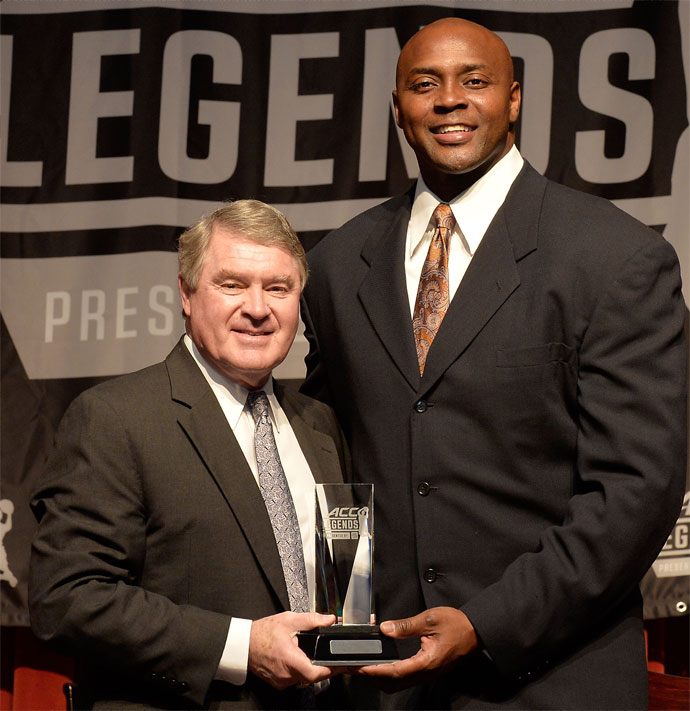 Gaining RecognitionHorace receives the award he earned for becoming an ACC Legend from current league commissioner John Swofford in March, 2015 in Greensboro, North Carolina at the ACC Tournament.

Horace was honored yet again by his college league in 2015 during ACC Legends weekend in North Carolina, where he, Shane Battier, Billy Knight, and Vinny Del Negro amongst others were acknowledged for their hard work and dedication during their career at their individual universities. In addition to formally becoming an ACC Legend, Horace had the unique opportunity to watch his nephew Jerian play during the ACC tournament for Notre Dame as a senior. The Fighting Irish won the tournament, and with his Uncle Horace and his father Harvey by his side, Jerian won tournament MVP. Horace was incredibly thankful to be honored by the ACC, and even more overjoyed to watch his nephew follow in his footsteps the very same weekend. 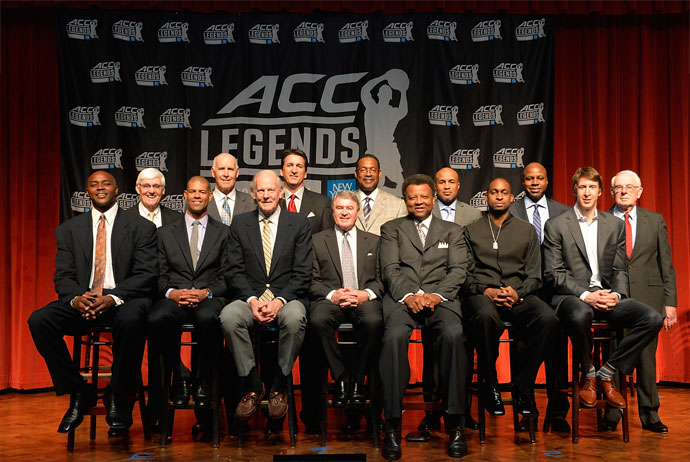 Among LegendsGrant celebrates amongst other players honored as ACC Legends, including Shane Battier, Vinny Del Negro and Malcolm Huckaby acknowledged in March, 2015.

"Horace Grant is the most underrated player of all time."