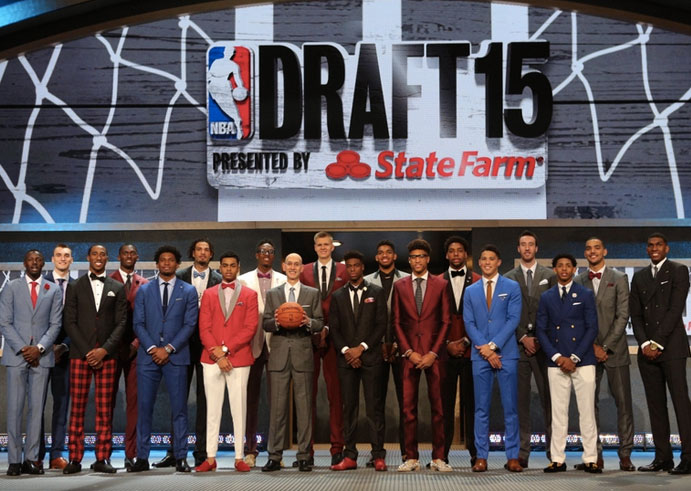 As the 2015 NBA draft approaches, fans and franchises alike are scrambling to assess the greatest players to enter the league next season. Among the countless draftees lies endless talent and limitless potential for the future of the the NBA, beginning with some of the big names of college basketball and extending overseas to some intriguing prospects internationally.

Karl-Anthony Towns, Jahlil Okafor and D’Angelo Russell are generally believed to be chosen first in the 2015 NBA Draft that will take place tomorrow, June 25. If Towns is chosen first, the Minnesota Timberwolves will gain a strong shot-blocker and talented rebounder to help keep them from remaining at the bottom of the barrel on defense. Towns’ assertive performance in the NCAA tournament proves he will be highly valuable to the Wolves, and when he packs on a few more layers of muscle he could become the “big man” they desperately need. While his defense has gained plenty of attention, he fouls an average of 5.6 times during every 40 minutes of play, which could prove to be an issue for any team. By adding Towns’ to the roster, in addition to the return of Rookie of the Year Andrew Wiggins, the Timberwolves should see a great improvement from their lackluster rankings during the 2014-15 season.

Jahlil Okafor, if chosen second in the draft, will go to the Los Angeles Lakers. During his freshman year at Duke he earned an NCAA title, and gained tremendous attention for his ideal size and advanced passing capability. Okafor has a highly developed post game, and his 7’5’’ wingspan helps tremendously on both sides of the court. While he can contribute significantly to any team in the league, Okafor unfortunately shares many of the same strengths and weaknesses as last year’s first round draft pick to the Lakers, Julius Randle. In addition to this potential drawback, Okafor’s 51% free throw percentage leaves something to be desired- but as arguably one of the greatest post scorers to enter the draft in years, he may be what the Lakers need to rise out of their mediocre ranking last season.

Ohio State’s D’Angelo Russell is likely to be the third pick in this year’s draft following his freshman year. Russell is continually praised for his maturity and court awareness that rivals veterans of the league, meaning his transition from just one year of college basketball to the pros could be much smoother than most’s. While he has the basketball IQ of an All-Star, he has been criticized for his lack of explosive play on the court. The Philadelphia 76er’s, third in draft order, are likely to sign Russell- and are in dire need of someone to beef up their inadequate offense. The Sixers scored 10 fewer points per every 100 possessions than the league average, the worst differential over the last 12 years. With his refined ball handling and keen eye for assists, Philadelphia could benefit immensely from acquiring D’Angelo.

“Just for us to be in the NBA together like my dad and my uncle were, it’s just something that you can’t even explain.”Jerian Grant

Of the other players to enter the 2015 draft, there are many standouts gaining national attention- one of whom is Jerian Grant, Horace Grant’s nephew. Jerian has garnered plenty of media attention during his four years at Notre Dame, and made first-team All-American while helping lead the Fighting Irish to 32 wins during his senior season. ND ultimately finished third in the ACC and made the Elite Eight during the NCAA Tournament. He lead Notre Dame in scoring by averaging just over 18 points per 40 minutes played. Grant entered the draft in 2014, but ended up retracting his entry while choosing to finish his four season eligibility and graduate from college. Analysts have slated him to be chosen as a first round draft pick anywhere from 14th to 19th, to either OKC, the Celtics, or the Wizards. Keeping it all in the family, Jerian’s brother and Philadelphia 76er’s player Jerami truly wishes his brother sees more success in the league than he has. Jerami claims “That’s the type of family we are. We always want the other guy to do better. Having a family that’s close means a lot to all of us.” Jerian shares the same enthusiasm for entering the league with his brother, stating “just for us to be in the NBA together like my dad and my uncle were, it’s just something that you can’t even explain.” Wherever Jerian is selected to play, Uncle Horace will give his full support to, saying “man, no matter my past in the league, I will be rooting for my nephews no matter which jersey they wear.”