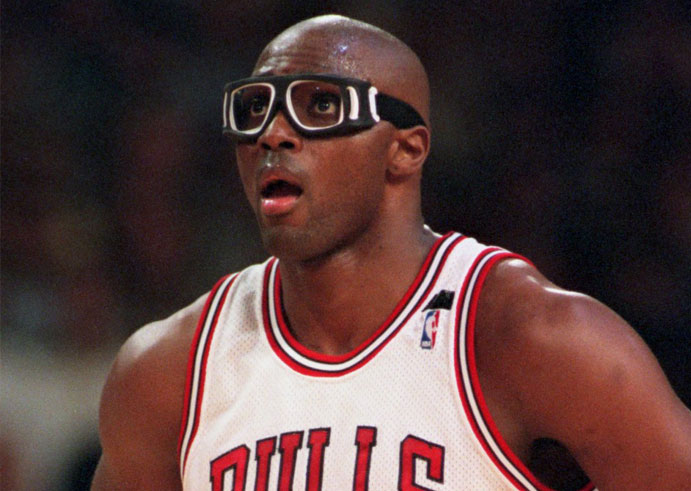 Horace Grant’s incredible work ethic and unwavering dedication to basketball led him to win four NBA championships, although he may be more easily recognizable due to a particular accessory he wore throughout his career. Joining the ranks of Luke Skywalker and the Karate Kid, Horace trained for the first two seasons with the Chicago Bulls without his full range of sight. Horace recalls “one night after the game on the bus I’m reading a book and I had the book like three inches away from my face. And Johnny Bach, who was one of our defensive assistants, came up and said, ‘You need to get your eyes checked again.'” Following instructions, Horace goes on, “The next day I go in and I’m legally blind!” Despite passing the initial hearing and eyesight exam from the Bulls, Dr. David Orth determined Horace’s eyes were 20-40 in one and 20-80 in the other. Horace was declared legally blind, thus “the goggles were born”.

“The next day, I go in and I’m legally blind!”Horace Grant

Horace become well known for sporting his prescription goggles during every game, allowing him to finally see at full capacity. Dr. Orth suggested Horace could not see very clearly shooting behind 12 feet, boldly claiming “If he doesn’t have a backboard to shoot at, he’s dead,” but also optimistically expected him to improve his long range shooting greatly with improved vision. Grant referred to the transition as “clearly eye opening – no pun intended.” Despite getting lasik surgery later on in life, Horace continued to wear his iconic goggles to serve as a role model for kids who wear glasses.

Grant is not the only professional athlete to overcome hardship- in fact, many athletes have suffered both mental and physical setbacks that served as a challenge throughout their career. Teammate Michael Jordan and fellow NBA star Magic Johnson have both been diagnosed with Attention Deficit Hyperactivity Disorder (ADHD). Royce White, former member of the Sacramento Kings, has recently been battling the NBA for greater compensation for his anxiety and OCD. Overcoming mental hardship had proven to be difficult for these basketball players, who share their plight with competitors facing physical challenges.

Many sports feature athletes outside of the physical norm who have proven their hardships are not a hindrance to their success. Kyle Maynard is a quadriplegic MMA fighter and CrossFit aficionado, who climbed 19,340 feet up the face of Mount Kilimanjaro without assistance. Jim Abbott of Major League Baseball served as a left-handed pitcher for 10 years despite being born without a right hand, and even took home a Gold medal in the 1988 Olympics. Deaf football player Derrick Coleman earned a Super Bowl title with the Seattle Seahawks in 2013, and Trisha Zorn has become the most accomplished athlete in the paraplegic games as a blind swimmer with 41 gold medals.

While shaking his head, Horace laughs and adds “it was a blur… literally.”

Although some may have been harrowed by these drawbacks, each athlete successfully cleared the hurdles in their path and established their place in history. Horace is glad to have discovered his eyesight issues when he did, and looks back at his early career fondly, remembering that coach Phil Jackson “must have thought I was the most diligent player because I always grabbed a front-row seat while he was reviewing plays. But the truth was I couldn’t see the chalkboard from anywhere else.” While shaking his head and laughing he adds “it was a blur… literally.”